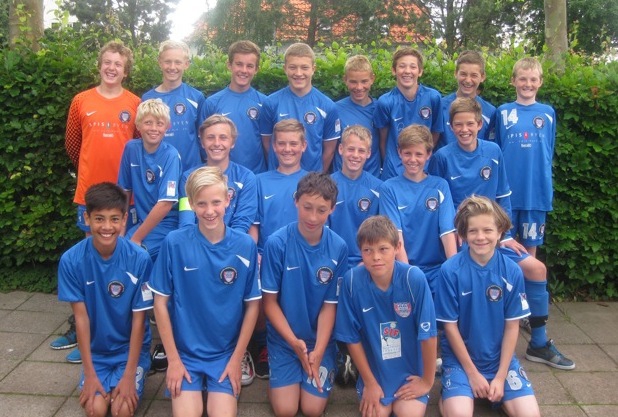 Team Chicago Academy is hosting Skovshoved IF’s U14 boys team July 13th-18th prior to their participating in the USA Cup in Blaine, MN.

Players and families from Team Chicago Academy-Palmeiras and Eagles are hosting 2 or 3 boys each, and the Palmeiras boys will practice with and against the Danes during the visit.

The Danes will also play against the 1995 Girls Regional ODP team in DeKalb, IL, and make trips to Chicago and Six Flags.

U19 National ODP Team Saves the Best for Last! 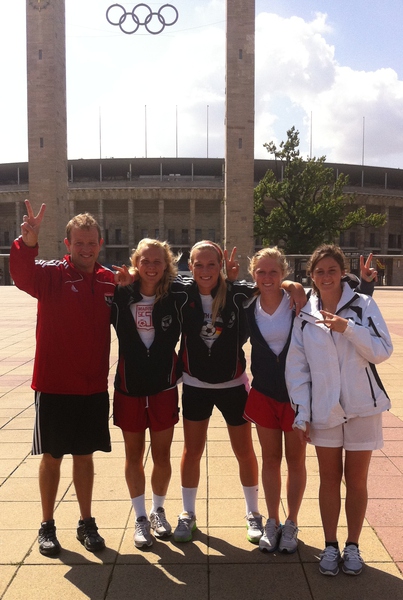 The U19 National ODP Team concluded its Germany Tour with a very impressive performance in a 4-0 win over FC Lubars in Berlin. FC Lubars narrowly lost out on promotion to the First Division last season, so it was a formidable opponent for the young Americans.

But after a nervy first 15-20 minutes the U19s found their feet, and really started to play good patient, possession-oriented soccer that forced the FC Lubars players to spend most of the game chasing the ball. Avoiding the common American problem of getting impatient and wanting to play at a 100 miles an hour, the U19 showed great poise and maturity, and scored 4 great goals in the process. Especially the final goal was a thing of beauty, as the U19 defenders and holding midfielder kept the ball for 15 consecutive passes (in the process frustrating their own forwards who were begging for the ball ) before a center-back found the left back on a weak-side run in behind the German defense with a perfectly weighted 40-yard pass.

Overall the game was a perfect end to the trip, as it showed that the players had embraced the theme and focus of the event. And it proved that American players CAN play patient possession-oriented soccer regardless of what is on display at most college, H.S., and club games all over the country. The German hosts and the referees were extremely impressed by the quality of the American play.

The U19s will conclude the event with a trip to the USA-Sweden game tonight at Wolfsburg and a pre-game BBQ with the friends and families of the U.S. players. 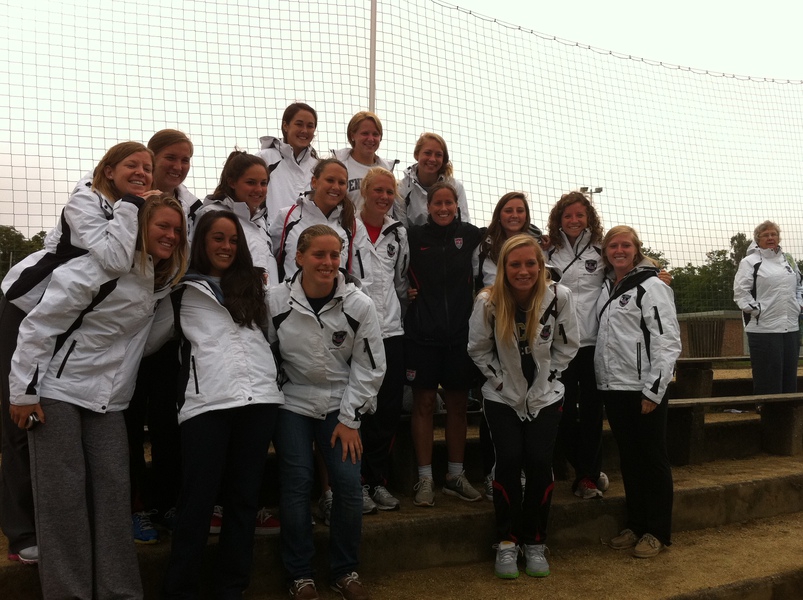 On the nation’s birthday the U19 National ODP team visited with the USA Women’s World Cup team at its practice ahead of the game against Sweden this Wednesday.

Assistant Coach Erica Walsh greeted the girls and gave them an overview of the practice session they were about to watch, and a few nuggets of information about how the US plan to beat the Swedes. Then followed a great training session, which showed the U19s how fast and intense a practice is at the highest level of the game. Although some of the same lack of concentration in crossing and finishing exercises, that our Team Chicago Academy players fall prey to, was on display, too.

After the practice Lauren Cheney, Amy Rodriquez, Kelly O’Hara, Rachel Buehler, and Stefanie Cox chatted with the girls. It was a real highlight of the trip thus far.

Following the National Team event, the U19s traveled to the former KZ camp at Bergen-Belsen for a very sobering and powerful look into the atrocities of the Second World War. This is the camp where Anne Frank and more than 100,000 other prisoners died from starvation, disease, beatings, and hypothermia. 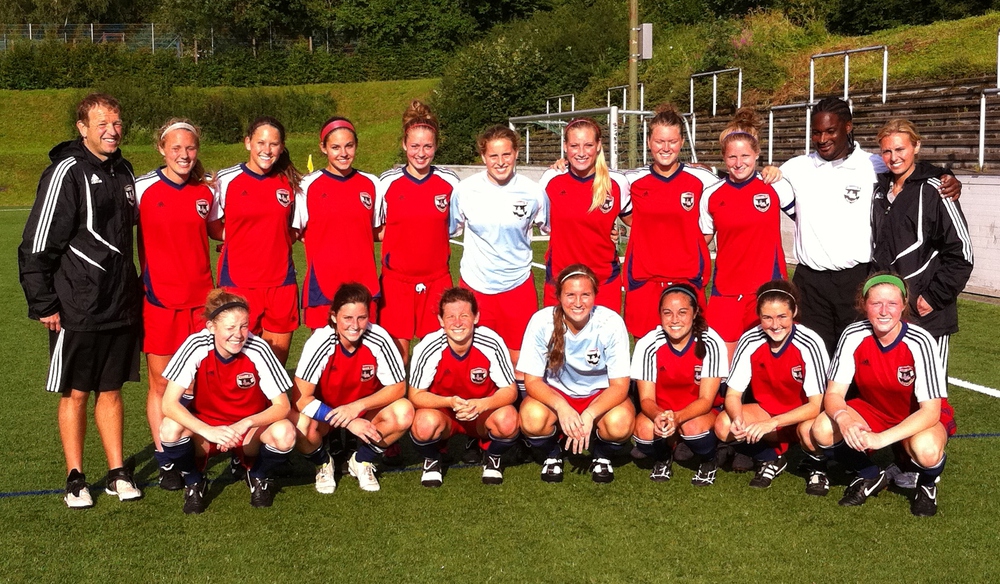 The U19 National ODP Team won the second game of its tour of Germany. This time the score was 5-1 against 2nd Division team Magdeburger FFC.

The U19s switched to a 4-3-3 formation for the game, and while the formation was different the quality of the performance was identical to the first game. Magdeburger was a stronger team than Siegen, but the U19s maintained 65-70% of the possession, and scored 5 great goals. The biggest difference between the two games, was that the outside backs were able to join in the attack much more frequently (a main focus of the trip) with the right back scoring a goal and the left back getting an assist.

The game followed the attendance at the USA-Colombia World Cup game, and was immediately followed by attendance at the Brazil-Norway game. Tomorrow’s program includes a visit to the US Women’s National Team training sessions, and a meet and greet with the players and coaching staff which promises to be a real highlight of the trip.

U19 National ODP Team is off to a great start! 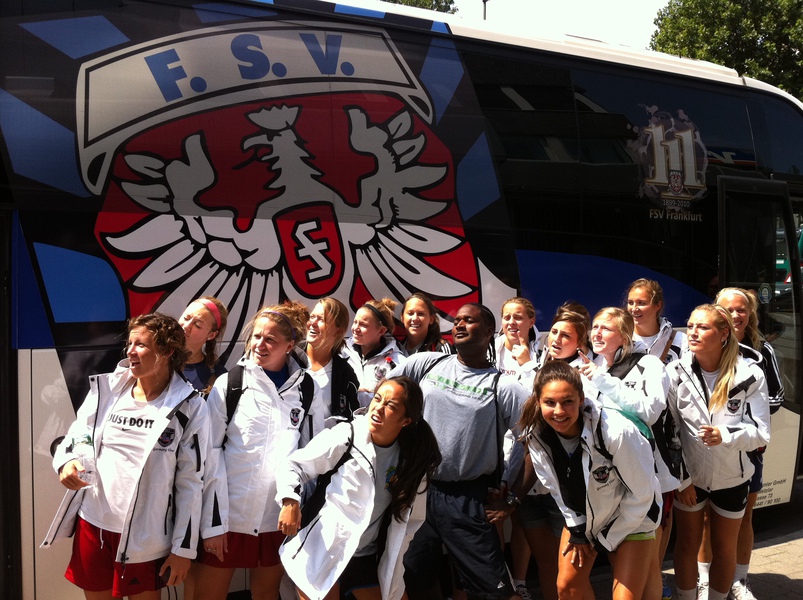 The U19 National ODP Team under head coach Phil Nielsen got off to a great start today in a friendly against a German 2nd Division team.

Playing in a 4-1-3-2 formation and focusing on keeping possession of the ball and being patient in the build-up, the U.S. team went up 2-0 at the half before exploding for a 5-1 2nd half and a 7-1 final score. It was a very impressive performance after just a single practice session together.

Up next is for the team is to watch the USA-Colombia game tomorrow night, and then a match v. Magdeburger FFC from the German 2nd Division on Sunday.